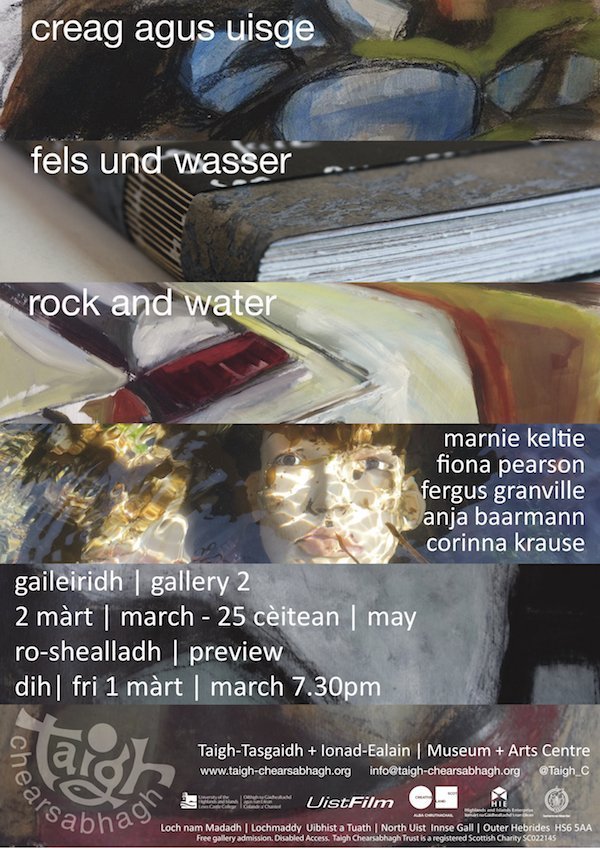 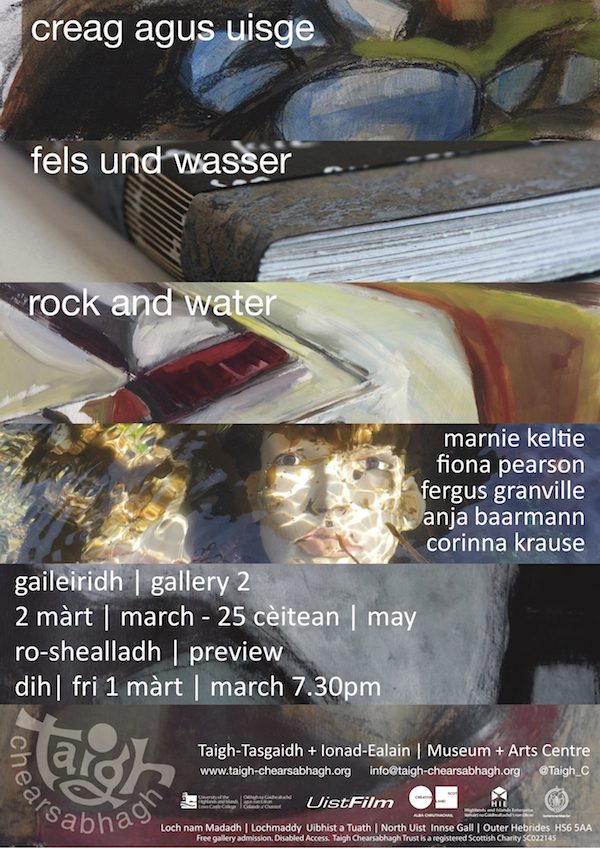 I am flying over North Uist on a late November afternoon. The arrival into Benbecula airport is unnerving. Beneath me through the dark grey cloud there suddenly appears a vast landscape that stretches out as far as the eye can see. A landscape where there is more water than land, where rock emerges from glistening waves on silver pewter lochs and a constantly shifting ocean. As the plane makes its awkward descent in strong winds, there is an alarming sense that there will be no runway ahead, that this world is entirely engulfed by water. Touchdown is a bruising affair as if one has been ejected at speed from the skies onto the hard-rock surface below. And yet, it is an adrenalin fuelled, exhilarating feeling to return to these islands.

For each of the 5 artists in this exhibition, this land of rock and water perched in the most north westerly part of the British isles has a magnetic pull on their creative imagination and drives their artistic practice. For the majority these Islands of North Uist are also their home.

To be in their studios is a humbling experience. Each are like a silent sanctuary from the battering wind and rain outside. These island studios operate as different sites of production and reflection. In one the room is infused with the smell of fresh oil paint; a palette of colour reminds us of the summer machair covered in wild flowers or lichen clinging to ancient rock. In another a large pebble weathered by the sea weighs down heavily on beautiful sheets of newly made marbled paper, nearby a menacing guillotine is poised to make a lethal cut. Paper, Scissors Stone; where there are artists and artistic production, there is risk. For one artist the sea itself is an extension of the studio. A fluid tidal zone to immerse objects, then see them resurface months later to have evolved new forms through a baptismal creative transformation.

Talking to the artists one is aware that they habitually look out of the studio window, it’s a reflective repetitive thing drinking in the view, a responsorial nod to mother nature and her extraordinary capacity to inspire and offer something new, something unpredictable. In these winter months so far north, the light is precious, in the summer it will rarely disappear.

For painters Fiona Pearson, Marnie Keltie and Anja Baardmann the stuff of the paint itself is all important. For each there is an act of enquiry and discovery through immersion in the landscape itself; through touch, smell, walking, swimming. There is also a deep sense of history and awareness of the abundant archaeology and that they are not the first to follow along these pathways over moor, shoreline and hill. Places like Barpa Langass, an ancient burial cairn, are recognised as some of the oldest stone structures made by man in Northern Europe. This is a land where geology is empowering and giant erratic boulders have a phenomenological presence that fires the imagination, inspiring each of these artists to immortalise their experiences through expressive drawing and painting. Each mark is a diluted experience of the act of being on these islands.

And then there is the geology of bookbinding. In the highly skilled artisan work of Corinna Krause, paper, cloth and card are marbled, folded, pressed then immaculately engineered and stitched to produce extraordinary geo-books and treasure boxes. These works are knowledge vessels for capturing our imagination; our thoughts, stories, precious objects. Each echo the enormous forces that created, folded and scarred the Lewisian Gneiss and Basalt that shaped the landscape around Krause’s studio. These things to hold and open help us better comprehend the vast leviathan of frozen water that once edged over this landscape grinding rock against rock.

There is not a place on North Uist that Fergus Granville does not know. Indeed much of his artwork starts life as flotsam that has been washed-up on remote isolated beach beyond normal human accessibility. Secret, magic places that are both real and imagined. Through a form of creative intervention new narratives that are constructed back in his studio take us into a world that is primeval and asks questions of our inner self. These sculptures have supernatural properties that have a divine or sacred presence. One that our ancient forefathers would recognise. Like the acclaimed Victorian anthropologist William Pitt Rivers, Granville has in his studio a snooker table that has become a platform for collecting, archiving, creative production and unapologetic playful reinterpretation.

This exhibition celebrates another important aspect of life on these islands of rock and water located on a remote archipelago in the north-west part of Europe. The notion of confluence has been all important over millennia in shaping not only the geography but also the culture and community of North Uist. These island people are legendary for providing outstanding hospitality and have hosted generations of migrating travellers from all over the world. That two of the artists in this exhibition are from the former East Germany with one now a permanent resident on North Uist demonstrates that rather being out on the periphery, these islands are very much at the centre. If there is a cultural magnetic north, it is here.

University of the Highlands and Islands