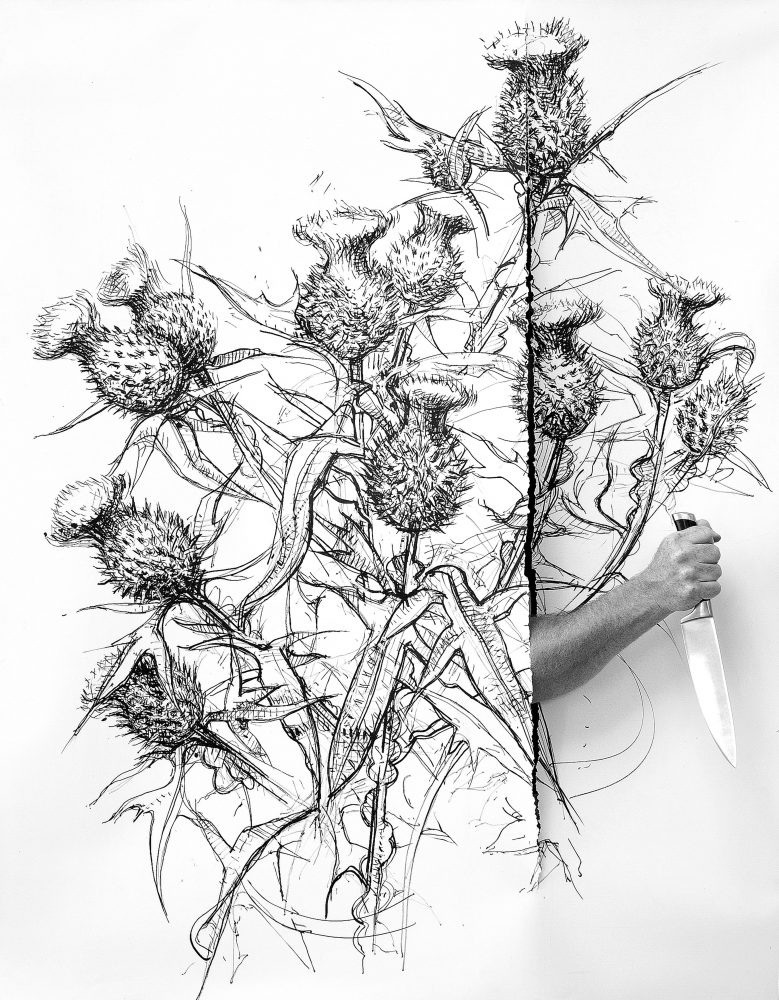 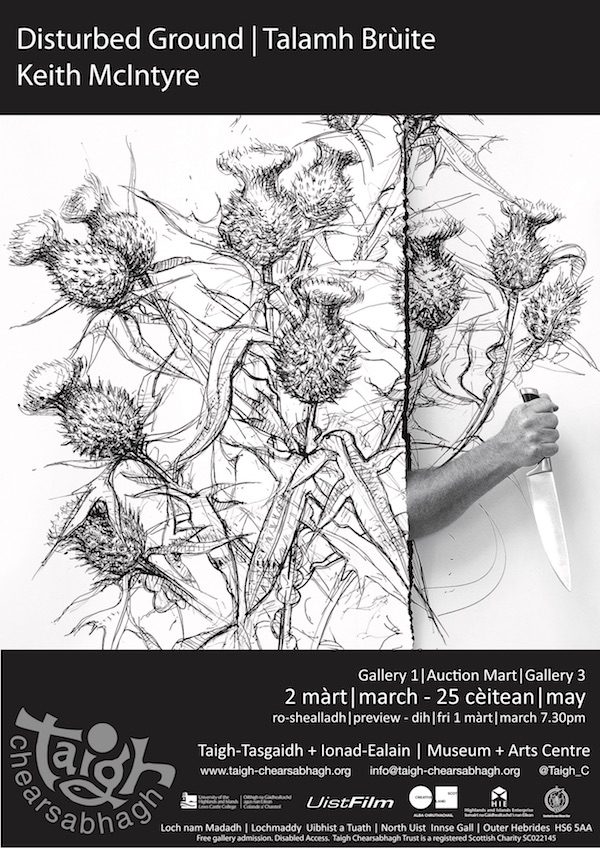 I am visiting the Isle of Berneray in the Outer Hebrides catching up on the building of our new studio, a restored Thomas Telford Parliamentary Church. Driving up the track I am perplexed to see that the entire site is now covered with thistles when before it had been a meadow of grass. When I ask Donald John MacAskill the Crofter where all the thistles have come from he surveys the land then turns to me.

‘You have disturbed the ground. When you disturb the ground, the thistles will come.’

This intrigues me, the notion that thistle seeds could lie dormant in the ground for many years and are then germinated on its disturbance offers new ideas around the geo-cultural history of our land of sand, soil, peat and rock.

The Disturbed Ground thematic also triggers a number of thoughts around our association with the physical geology of Scotland. There are places and rocks that have an almost phenomenological presence; Suilven in Sutherland shaped by ice, Fingels Cave on Staffa shaped by the sea, Garvie Rock off the coast of Durness, indefatigably resistant to daily RAF bombing runs and the only place in Europe where 1000lb ordinance can be tested; or the singing boulder of Tiree, an erratic carried over during the ice age from Rhum, disturbed from one island to another. And then there is the impact when these features are no longer there. The Old Man of Hoy is expected to collapse in our lifetime, its image is immortalised in film and tv and has a ubiquitous presence in Orcadian tourism and marketing. Or the story of Roineabhal on Harris where the proposed Super Quarry at Lingerbay (fortunately rejected) would have seen the removal of 600 million tonnes of anthracite rock, in effect amputating the mountain in half.

These forces of nature occasionally interrupted by man continue to offer new pathways of creative enquiry. In the work of the 20th century author Neil Gunn we are continually taken on a journey of discovery, both about nature and about ourselves. His description of the young Kenn’s battle to capture the powerful salmon early on in ‘Highland River’ is a dramatic account of a primeval instinct to conquer nature, and a rites of passage into adulthood with generations of forefathers looking on. The final act of dropping a large rock on the salmon then wrestling it out onto the river bank remains one of the most symbolic and powerful passages of writing in Scottish literature.

The success of Highland River motivated Gunn to give up his job, sell his home and embark on a new adventure. Not untypical for a creative risk-adverse mind, the first thing that Gunn does is purchase a not too sea-worthy boat and sail around the Hebrides. That boat was called the Thistle.

In Scots Gaelic, Donald John’s MacAskill’s first language, there is no definitive translation of Disturbed Ground as intended in the English context. ‘Thistles will come with the disturbance of ground’ might be ‘Thig gìogan le buaireas an talamh…’

While Fòidearaich, translates as to turn over and treabhadh refers to the act of ploughing, it interests me that disturbed has a number of iterations and that can reposition context and interpretation; mì-shocair, troubled, uneasy, uncomfortable; bruailleanach, confounding, deranging; mÌ-shuaimhneach, annoyed, distressed,

In discussing this subject with Gaelic speaking friends and scholars one person ends our conversation on a note of silence then says ‘of course, there are a lot of reasons why the ground should be angry with us.’

With thanks to Brian Ó hEeadhra

The exhibition continues ‘on demand’ across the road in UistFilm (ex-tourist info) including the screening of Moylley yn Burroo and also additional large-scale drawings in the Auction Mart by arrangement. Normally available 10-4pm Monday to Friday only. 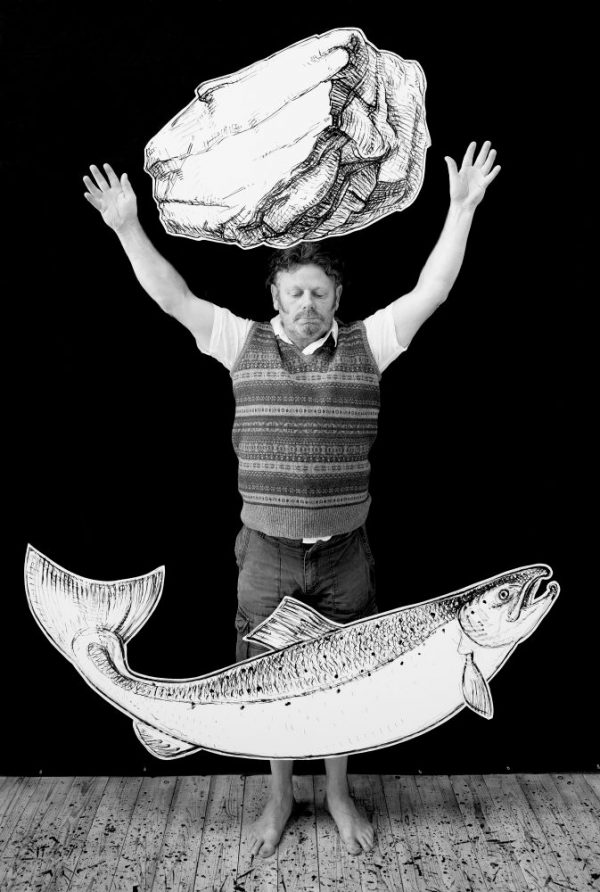 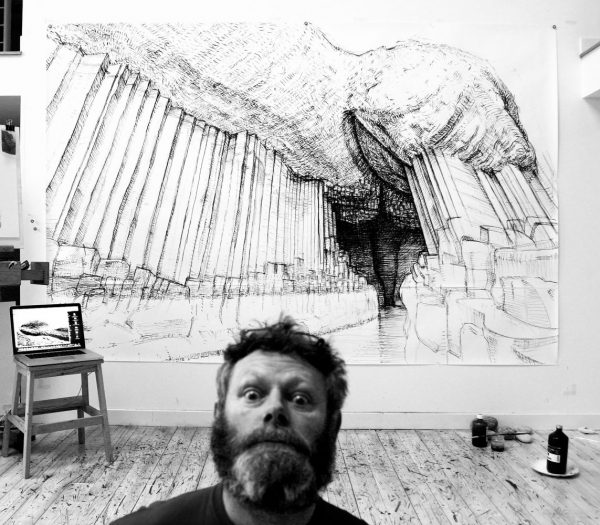 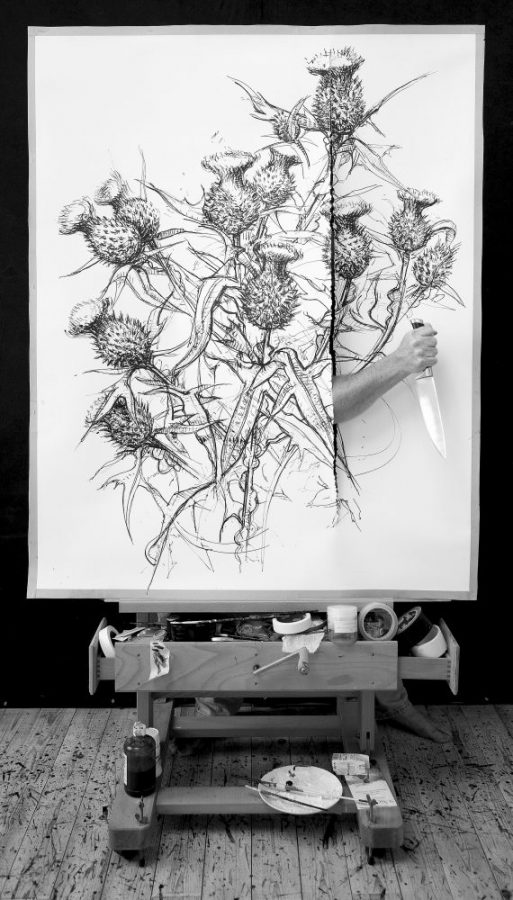 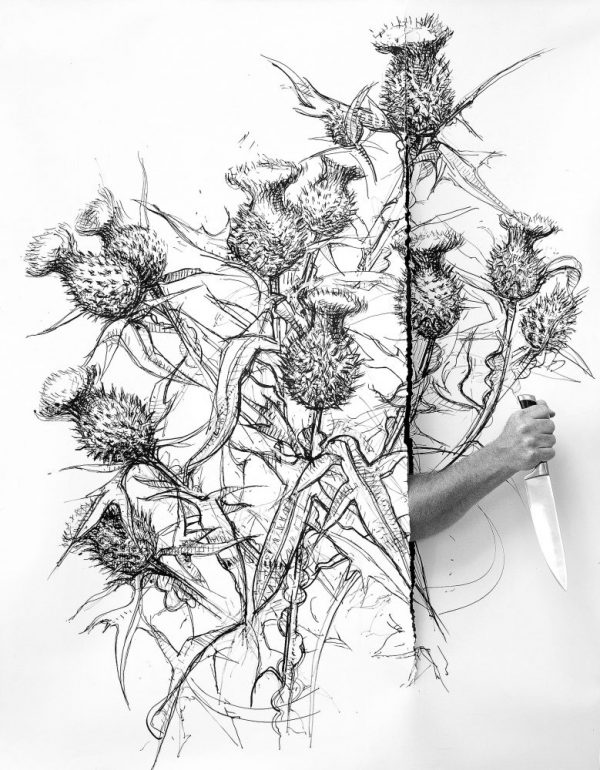