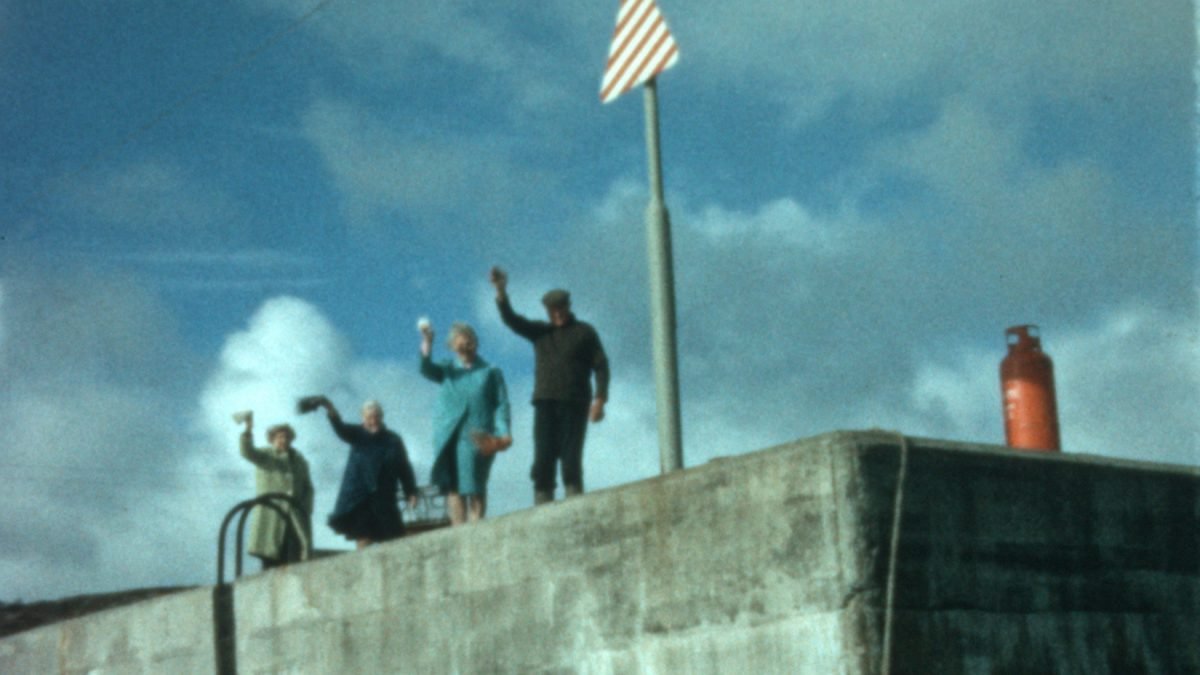 This screening is now fully booked. Please email your name and phone number to taigh@taigh-chearsabhagh.org to join a waitlist for any cancellations, or to express interest in a repeat of this screening.

Join us for a special screening of Dùthchas | Home at Berneray Community Hall to celebrate its release and selection for the Edinburgh International Film Festival. Book your free ticket now using the booking system below. Donations for the Berneray Hall Roof Fund are much appreciated. You can donate to the crowdfunder online here, or you may bring cash and donate at the door when you arrive.

There are limited spaces for this free event. If you need to cancel your space for any reason, please email taigh@taigh-chearsabhagh.org as soon as you can so we can offer it to someone else.

For all other screening dates and locations, please visit the Dùthchas main site.

“When the FAODAIL | FOUND archive film project were given this archive film collection, as Donald says in the film, we didn’t know what was on it other than what was written on the reel boxes – Berneray 1960-78. Thanks to very generous crowdfunders we had the collection digitised to 4K and were amazed at the fantastic scenes the reels held. One iconic scene was repeated every time the filmmakers, Bill & Ann Scott, left the island – friends and family waving from the pier as the boat slowly pulls away. I knew we had a film to make.”

Andy Mackinnon has worked in creative and collaborative film and contemporary art since the late 80s, and lives on the island of North Uist in the Outer Hebrides. He was director/cinematographer/producer of the Scottish BAFTA nominated £300k budget feature documentary TRANSITION, the first Scottish documentary to make the official selection at IDFA in 2000. In 2000 he worked with Taigh Chearsabhagh Museum & Arts Centre to make the participatory documentary feature Passing Places – The Real Outer Hebrides. He is passionate about environmental issues and the islands where he now lives.

“This precious footage from Berneray provided us with the perfect opportunity to explore how cultural and linguistic loss has affected one tiny island. A similar story can be seen throughout the Hebrides over the last century, but it’s important to balance this with the profound sense of community and deep belonging that still runs strong. It’s a special thing to have the story of Berneray told by the islanders (and descendants) themselves, and it’s been a real privilege to get to know them better in the process.”

Kirsty MacDonald has over twenty years of experience in the Gaelic language and cultural sector. A native of North Uist, she is fluent in Scottish Gaelic and has a love of indigenous minority cultures and languages, history and ethnology. As well as researching and presenting the archaeology series ‘Talamh Tròcair’, she has contributed to several broadcast productions for BBC Alba such as An Dotair Mòr (2014), An Cràdh / Endo What? (2015), An Taistealaiche / The Far Traveller (2019), Iorram / Boat Song (2019) and Maorach: Hebridean Shellfish (2021). Dùthchas | Home is her first Co-director role.

Donald Shaw is an acclaimed Scottish musician, producer, festival director and award-winning composer. He has recorded and collaborated on over 100 albums with musicians in all styles of music, created Bafta-winning soundtracks and directed large-scale live commissions. Throughout his musical life, Donald has been involved in composing for film and TV. He has composed and produced music for HBO, Netflix, Amazon, BBC, Channel 4 and US cable channels. Recent soundtrack commissions include the BBC Network Nature series Scotland’s Wild Heart, flagship BBC Alba drama Bannan, and the Bafta-winning children’s TV series Katie Morag. His soundtrack to Hebrides – Islands on the Edge (narrated by Ewan McGregor) was nominated for the coveted Jackson Hole award. He contributed to the soundtrack to the Emmy-winning HBO series Succession. The BBC London Philharmonic Orchestra, the Halle Orchestra, the BBC Scottish Symphony Orchestra, the Royal Scottish National Orchestra and the Scottish Chamber Orchestra have performed their compositions. He was rewarded with two Royal Television Society awards for Best Soundtrack and Best Theme in UK television for the BBC drama Crowdie and Cream (co-composed with Charlie McKerron), and his expansive score co-created with James Grant featuring music and poems for the millennium art film Transition by Andy Mackinnon was BAFTA nominated for Best Soundtrack.

John Archer and Hopscotch Films work with great documentary directors to make their passion projects. Jono McLeod’s My Old School premiered in Sundance this year and is released in UK cinemas in August. Mark Cousins’ The Story of Film a New Generation was the first film to play in Cannes 2021 and received terrific reviews. Other projects with Mark Cousins are: Women Make Film: A New Road Journey Through Cinema (Venice, Toronto and London Film Festivals), awarded Innovation in Storytelling at European Film Awards 2020; I Am Belfast; Atomic: Living In Dread And Promise and The Story Of Film: An Odyssey (Peabody Award, Stanley Kubrick Award) which has just been remastered to HD and is still selling around the world a decade after its first release. Other recent feature films are with Matt Pinder – Harry Birrell Presents Films of Love and War (Winner Audience Award Glasgow Film Festival 2019); Stephen Bennett’s Eminent Monsters (Traverse City Film Festival 2019, Winner Best Documentary Belfast Human Rights Festival); and Rachel Maclean’s Make Me Up (LFF, Rotterdam, Gothenburg.

UistFilm, based on North Uist in the Outer Hebrides, was formed in 2013 by Andy Mackinnon within Taigh Chearsabhagh Trust and produces a wide range of media content including commissioning and collaborating on artists’ moving images. Andy produced and directed UistFilm’s first broadcast documentary commission, the widely acclaimed An Dotair Mòr (2014) and recently collaborated with Joshua Bonnetta, whose Uist-shot feature An Dà Shealladh | The Two Sights premiered at Berlinale FORUM in 2020.

UistFilm’s FAODAIL | FOUND Outer Hebrides Archive Film project seeks to digitise and disseminate indigenous archive film of the islands as currently all of the National Library of Scotland Moving Image Archive relating to the Outer Hebrides is from outsider perspectives.

Supported by the Scottish Government and the National Lottery through Screen Scotland.