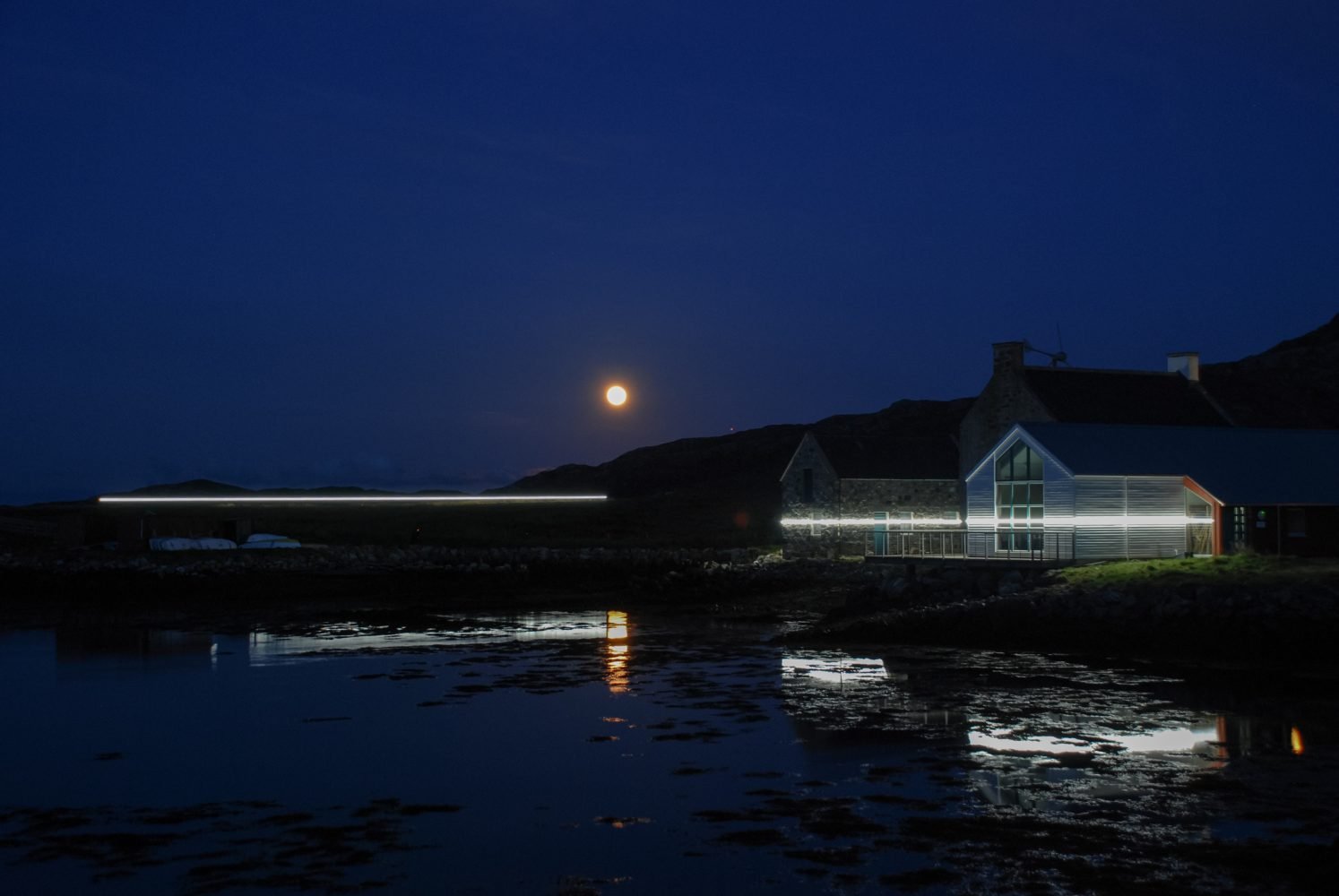 By use of sensors, the installation interacts with the rising tidal changes; activating on high tide. The work provides a visual reference of future sea level rise.

The installation explores the the catastrophic impact of our relationship with nature and its long term effects. The work provokes a dialogue on how the rising sea levels will affect coastal areas, its inhabitants and land usage in the future.

This is specifically relevant in the low lying island archipelago of Uist in the Outer Hebrides off the west coast of Scotland, and in particular to Taigh Chearsabhagh Museum & Arts Centre in Lochmaddy where the installation is situated. The centre cannot develop on its existing site due to predicted storm surge sea levels.

The experiment engages the viewer with the impacts of the climate crisis. By moving the interactive parameter – time between years 2000 – 2300 and beyond to glacial melt, visualizes the impacts through a map interface and customized Google Street View. The glowing areas on the map interface and the glowing horizontal line on the Street View represents the sea level rise. These can be altered through an interactive parameter – time, which reveals the impact of humans caused environmental disaster.

Coastline Paradox is a continuation from the artists’ installation Lines (57° 59? N, 7° 16’W). By extending their work to a online platform, the viewer can discover a world where chaos and instability increases the further we move towards our uncertain future.

Aho has exhibited in group and solo exhibitions and presented public artworks in the UK and Finland. He has created installations and interventions in Norway, Denmark, The Netherlands and several other European countries.

Aho is a graduate of The Glasgow School of Art’s Sculpture and Environmental (BA Hons) Program in 2016. Aho lives and works between Glasgow, Helsinki and Tamokdalen in Northern Norway where he is working on a long-term environmental art project.

Pekka Niittyvirta (Finnish, b.1974 lives and works in Helsinki)

Pekka Niittyvirta is an artist working at the intersection of photography, installation and other imaging technologies. He works on projects differing both in aesthetics and contents, forming a body of work that lays critical looks at our socially constructed realities.

Niittyvirta has exhibited his work since 1999 internationally in both solo and group shows. He has been shortlisted for the Fotofinlandia prize in 2004, 2006, 2014 & 2016. He also received the Environmental Artwork prize of the year of Finland in 2014.