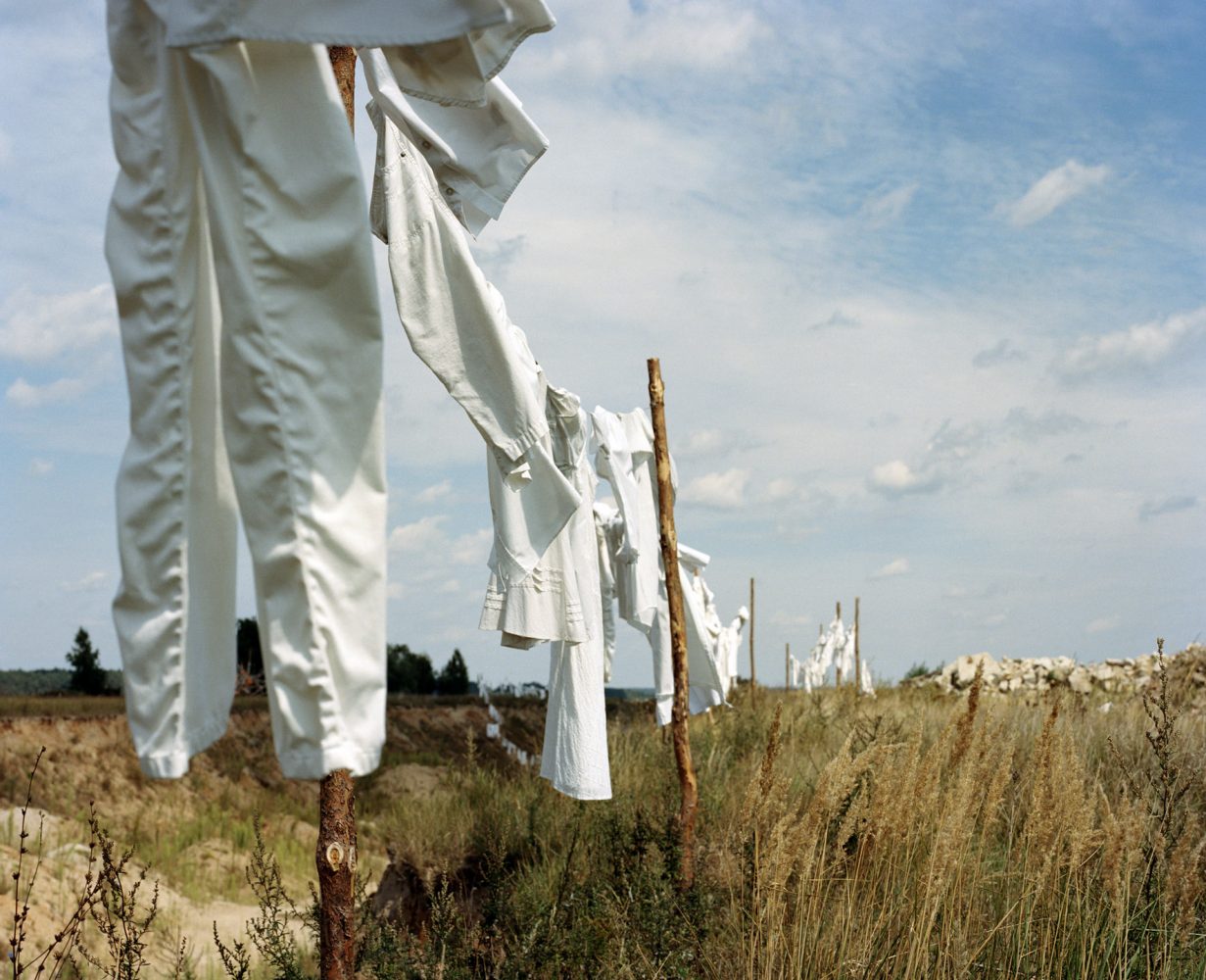 1:30-4pm: To Step Across the Line conversations:

On Lines in the Landscape

On Straight and Entangled Lines

On Consequences of Lines

The film is a compelling and unsettling portrait of Bo Gritz. Lt. Col. James Gordon ‘Bo’ Gritz – “the American Soldier” for the Commander-in-Chief of the Vietnam War – is one of the most decorated combatants in US history. The inspiration behind RAMBO, Colonel John ‘Hannibal’ Smith (THE A-TEAM) and Brando’s Colonel Kurtz (APOCALYPSE NOW), Gritz was at the heart of American military and foreign policy – both overt and covert – from the Bay of Pigs to Afghanistan.

To Step Across the Line festival is produced by The Wapping Project in partnership with Taigh Chearsabhagh Museum and Arts Centre and accompanies the exhibition Making Her Mark by Mairéad McClean.

The Festival is generously supported by the National Lottery through Creative Scotland.

Tara Bergin was born and grew up in Dublin. In 2016 she received an Arts Council Ireland Literature Bursary to write her second collection, The Tragic Death of Eleanor Marx (Carcanet), which was shortlisted for the T.S. Eliot and the Forward Prizes. It was selected as a Poetry Book Society Recommendation, and a Best Poetry Book of 2017 by the Times and the Irish Times. Tara now lives in the North of England and lectures part-time at Newcastle University.

Kapka Kassabova is the author of Border: a Journey to the Edge of Europe(Granta, 2017), Twelve Minutes of Love — a tango story (2011), and Street Without a Name (2008). Her poetry collections are All Roads Lead to the Sea (1997), Reconnaissance (1999), Someone else’s life (2003) and Geography for the Lost (2007). Her essays and articles have appeared in The Guardian, The Times Literary Supplement, Vogue, The Sunday Times, The Scottish Review of Books, and on BBC Radio 3 and 4. Raised in Sofia, Bulgaria, she was educated in New Zealand and now lives in the Scottish Highlands.

Tess Letham graduated from the Scottish School of Contemporary Dance and the Postgraduate programme at Northern School of Contemporary Dance. She has been working as a freelance artist in the UK performing for individual choreographers and companies, most recently including Underhand Dance, All or Nothing, Stephen Pelton and Alan Greig Dance Theatre as well as creating her own work.

Mairéad McClean was born and grew up in Beragh, Co Tyrone, Northern Ireland, and has lived and worked for the past 25 years in London. She completed a Post Graduate in Fine Art at the Slade School of Art. She is an award-winning filmmaker who has produced work around the themes of memory, identity and migration. Her recent piece No More, won the inaugural MAC International Art Prize in 2014 and was acquired for the National Collection at The Irish Museum of Modern Art, Dublin, through the Hennessy Art Fund in 2017.

Murdo Macdonald is Emeritus Professor of History of Scottish Art at the University of Dundee. He is author of Scottish Art in Thames and Hudson’s World of Art series. He is a former editor of Edinburgh Review. His research interests include the art of the Scottish Gàidhealtachd (in combination with colleagues at Sabhal Mòr Ostaig, the Gaelic College of the University of the Highlands and Islands), and the cultural milieu of the Celtic Revivalist and ecologist Patrick Geddes, not least with respect to cognate revivals in India and Japan. He has a longstanding interest in James Macpherson’s Ossian as a point of origin of the Celtic Revival. With Eric Shanes in 2013 he identified J M W Turner’s lost Ossian work from 1802. He was appointed an honorary member of the Royal Scottish Academy of Art and Architecture in 2009, and an honorary fellow of the Association for Scottish Literary Studies in 2016.

Margaret Joan MacIsaac lives on the Island of North Uist in the Hebrides of Scotland; between family commitments she completed a BA hons in Fine Art through the University of the Highlands and Islands, achieving a First Class Honours Degree. Margaret Joan works through a multi disciplinary approach, exploring how stories can be told in a beautiful way. The placement of work is important as subtle sensory experiences can change depending on the surrounding. Sometimes utilising everyday objects in assemblage, returning them to their original purpose when the work is completed. Exploring rituals, social constructs, privilege and the treatment of mental health conditions. She uses personal experiences to create work to prompt conversation. At the moment Margaret is exploring Gestalt Therapy, the concept of the two chairs approach and is working towards an Exhibition in Taigh Chearsabhagh next year.

Keith McIntyre is an artist working between Newcastle and the Isle of Berneray in the Outer Hebrides. In Scots Gaelic the word ‘Moladh’ means ‘In praise of…’ and prefixes the place or geographical feature that is to be eulogised or celebrated in poetry or song. The Moladh thematic as a vehicle for narratological speculation around geological phenomena has been driving much of McIntyre’s practice over the past 10 years. McIntyre is a Professor in Creative Practice at the UHI and Chair of Taigh Chearsabhagh Museum and Arts Centre.

Ellis O’Connor is a visual artist working in painting and drawing based on North Uist who graduated in 2015 from Duncan of Jordanstone College of Art & Design with a Master’s Degree in Fine Art and Humanities. Since graduating Ellis has worked in residency programmes including ones in Iceland and Norway whilst exhibiting her work locally and internationally. The work emphasises the fragility and sublimity of the land bringing the line, detail, texture and pattern together. By producing the work Ellis hopes it will give people a chance to connect with the land and respect the nature that is so wild around us, to then cultivate a deeper understanding and inspire others to make a difference. www.ellisoconnor.com

Bookings are no longer available for this event.