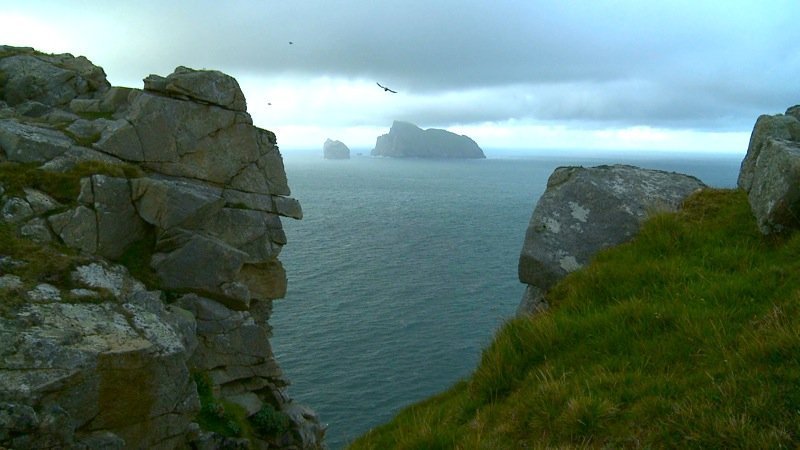 Alex Hartley will take up his residency on St Kilda on 25 June until the 8 July.

Jon MacLeod will undertake his residency from 22 july to 8 August.

The National Trust for Scotland, Scottish Natural Heritage and Taigh Chearsabhagh Museum & Arts Centre are pleased to announce an exciting artist residency scheme which provides valuable research and residency opportunities for two visual artists during the summer of 2013 on the remote archipelago of St. Kilda, the UK’s only mixed World Heritage Site.

The archipelago of St Kilda, the remotest part of the British Isles, lies 41 miles (66 kilometres) west of North Uist in Scotland’s Outer Hebrides. The islands with their exceptional cliffs and sea stacs form the most important seabird breeding station in Europe. The evacuation of the native population in 1930 brought to a close an extraordinary story of survival. For more information on St Kilda http://www.kilda.org.uk/

In 2005, after severe storm damage in the Uists in the Outer Hebrides, a major habitat for many bird species, Taigh Chearsabhagh Museum & Arts Centre in collaboration with artist/academic Keith McIntyre, director of GSN – at Northumbria University, and musician Karen Wimhurst initiated The Fragility of Flight project which has become an ongoing series of exhibitions and research programmes.

In 2013, from April 27th till July 27th, Taigh Chearsabhagh will host The Fragility of Flight an exciting exhibition of ornithological/environment-themed contemporary artwork from artists all over the world, including some from the Outer Hebrides. Artists include Claudia Losi, Dalziel + Scullion, Takaya Fujii, Edwyn Collins, Andrea Roe, Steve Dilworth and Deirdre Nelson.

Taigh Chearsabhagh are delighted to collaborate with the National Trust for Scotland on managing the inaugural St. Kilda Artist Residency funded by SNH/Year of Natural Scotland. The resultant work from the 2013 St. Kilda artist residency scheme will be included in the 2014 Fragility of Flight events.

One thought on “St. Kilda Visual Artist Residencies – Artists on their way”