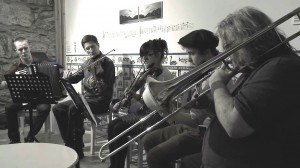 The exhibition is the culmination of a residency project with 7 local artists, writers and composers looking at transience in coastal habitation in the Uists. The project has been funded by Scotland’s Islands 2011.

An original composition by Simon Bradley inspired by the boat trips to abandoned settlements in North Uist undertaken with the other artists in September 2011. The piece is recorded here in collaboration with students from the University of the Highlands and Islands (UHI) music course in Benbecula.

The horizon in Uist, silhouetted against the wraparound sky, is a continuous narrative of sweeps and crescents that whisper secrets to the attentive eye. True and understated it does not hide behind forest or city- every step taken presents new glimpses too numerous to fully log with our half circle perception. Above, a soaring sea eagle weaves into this undulating thread between land and sky and below, the sea itself grounds with tireless improvisation in rhythm and meter.

a dannsa is a piocadh

The mane’s and tails of white horses

The fishermen are lying at the bottom

Without coffin or shroud

a crown of crabs on their heads

When places are abandoned, traces are left. The past is evident, in what is missing, as much as in what remains.

Remnants of buildings reveal the spaces where lives were lived. Blurred marks on the land testify to past labour. Songs and legends, told and retold, offer glimpses that point to a greater story.

Filmed ‘performances’ in the landscape of Uist have been a form of ‘erasure’.
During the residency with Taigh Chearsabhagh, I concentrated on lichens found during journeys to the uninhabited islands of North Uist.
I also collected objects found in the landscape, and by alchemy turned them to solid silver.

Exploring proximity, methods of mark making and engagement with the subject matter, I made a drawing/sculpture with fine polythene that echoes the constant state of change of the surface of the sea and the physical involvement with the sea by man, over thousands of years. Made in this way, one is immersed in the subject. Distance is minimal. In terms of mark making, the contribution from me is minimal, the surface of the sea itself constantly alters the work.

Informed by aspects and characteristics of the sea and man’s relationship with it, I made site specific works that are meant to be neither permanent nor perfect. Transparency allows everything to be seen, inside and out, without obscuring the subject itself. Much of my work will exist only for a short time.
Laura Donkers (visual artist)

An Roinn/A Sharing is a listening piece expressed through the native tongue. For those who share the language and the culture of the recent past it presents narratives that impart a familiar ‘lived experience’: a social history. Yet it also portrays the universal interplay of human communication: the collective spontaneous exchanges of response and reaction and intimate acquaintance that viewers without Gaelic will also understand.

The work comprises two filmed dialogues between old friends recalling the life and times of the inhabitants of Loch Portain, Cheesebay, and Hoebeg, and neighbouring islands. It also includes an audio recording of ‘Rathad ur Lochportain’ composed and sung by Helen MacLennan (Eileag). Grateful thanks are extended to her family for their kind permission to include this recording on the film. Many thanks also to the main contributors; Effie Ann MacPherson, Ina MacLennan, Roddy ‘Rods’ Maclennan and Donald John MacLeod.

Walking is a big part of my art practice and one of the main mediums I use to channel my ideas. Over six months on The Secret Sea Residency I have been filming what I call Under Water Walks. This underwater filming shows a sea creatures’ view into this magical world.

I conceived this work almost a year ago. I had a vision of a drawing installed in the busy cafe at Taigh Chearsabhagh. Filling up the height of the space with the social noise and clatter of crockery and tables to support it and help bring it to life. Read more...

2020 theme: Scotland’s Coasts and Waters Limited opening from Monday 3 August. As part of the one-way system through the building the exhibition is now open to the public and has been extended till Saturday 15 August Mondays, Wednesdays, Fridays 10am – 1pm, Saturdays 10am – 4pm Annual Summer Open exhibition presented by the UAA […] Read more...
See all Events >