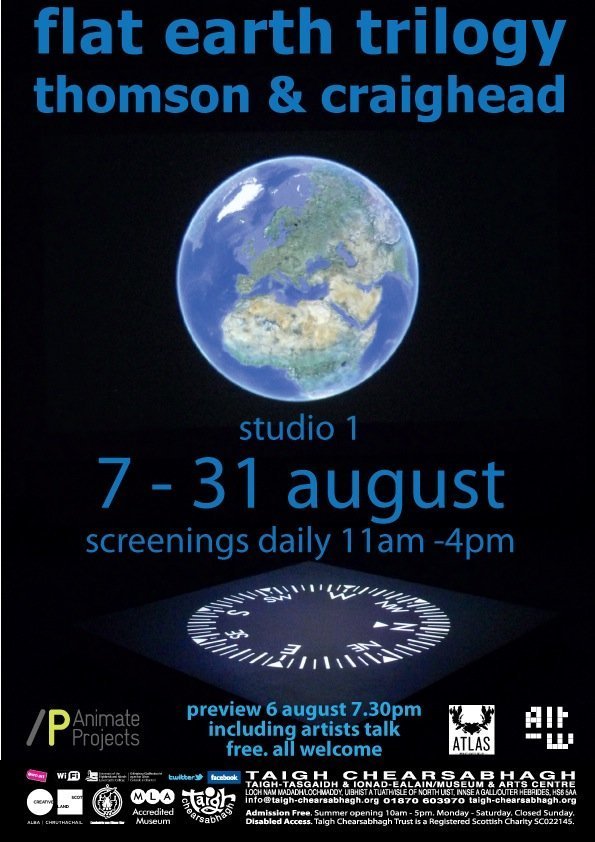 The Flat Earth Trilogy is a series of documentary artworks each made entirely from information found on the worldwide web.  They are shown together for the first time in their single screen form at Taigh Chearsabhagh.

The trilogy covers a six-year period beginning with Flat Earth (2007), A short film about War (2009/2010) and ending with Belief (2012).  In each case, the viewer is taken around the world encountering fragments taken from real peoples’ blogs, which are knitted together to form something resembling a story.

In Flat Earth, we see the visual language established where Google Earth is used as a way of joining each of these narrative moments together.  A short film about War focuses more specifically on the collective gaze of photo-sharing communities like flickr as a way of apprehending the locations being spoken about, while Belief looks to the video sharing community youtube and the phenomenon of video blogging and to a lesser extent ‘trolling’, where individuals attempt to sow discord online as an end in itself.

In all of these works, the artists are interested in exploring how our own spheres of influence have been extended and transformed by the internet, allowing us to experience and broadcast information around the globe in ways unheard of even fifteen years ago.

Flat Earth was made with Channel 4 and Animate Projects for television broadcast, but A short film about War and Belief have been developed as gallery installations as well as the single screen videos seen here.

In the gallery version of A short film about War, a second screen logs the provenance of images, blog fragments and GPS locations of each element comprising the work, so that the same information is simultaneously communicated to the viewer in two parallel formats -on one hand as a dramatised reportage and on the other hand as a text log.

The gallery version of Belief adds a synchronised floor projection of a compass, which interacts with the montage showing us where each clip originates in relation to the geographical location of the artwork thus placing the viewer at the centre point of a cinematic data-visualisation.

In both cases, the artists’ want us to consider our own relationship with this material -the way in which information changes as it is gathered, edited and then mediated through networked communications technologies or broadcast media, and how that changes and distorts what things mean; especially for (the generally wealthy minority of) the world’s users of high speed broadband networks, who have become used to the treacherously persuasive panoptic view that Google Earth (and the worldwide web) appears to give us.