Join storyteller and folk singer Matthew Crampton for stories and songs from his book Human Cargo: Emigration, Slavery and Transportation. Find out more about the book here. 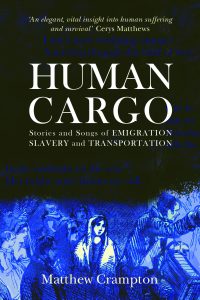 Understanding today’s migrant crisis through story and song from the past.

HUMAN CARGO explores the experiences of people who were trafficked or transported in the 18th and 19th centuries – linking their stories to those of migrants and slaves today.

‘I’ve found some incredible personal accounts – from people
actually on board the emigrant boats, the convict ships or the
slave vessels,’ explains Matthew Crampton, ‘so we can hear firsthand the horrors of their transportation.’

‘So often,’ he says, ‘modern migrants face the same ordeal as
people 200 years ago. Those frightened Syrian families we see
queuing on Mediterranean beaches today – they’re similar to
Scottish families cleared from their Highland homes in the
1800s, and herded onto boats for Canada.’

HUMAN CARGO brings surprising insights into well-known
areas such as slavery, convict transportation, emigration, the
Highland Clearances and the press gang. It combines personal
testimony with deftly-told tales and historical analysis. These
appear alongside testimony from modern victims of trafficking.
Strikingly, the book also includes the lyrics to 25 traditional folk
songs, some well-known but many obscure. ‘Folk songs give
voice to ordinary people,’ says Crampton. ‘They’re anonymous
but authentic records of those who don’t get to write history.’

As a folk singer, writer and historian, Matthew Crampton
created a story-and-song show called HUMAN CARGO which
has proved popular at festivals and folk clubs and raised money
for The Refugee Council. He has performed the show across
Britain with the London Lubbers shanty group.

His book HUMAN CARGO arose from these performances.
It offers an unusual and intriguing perspective on one of the
defining disasters of our times.