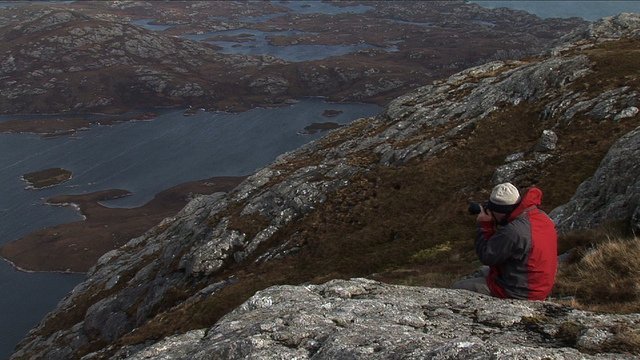 “Ever since I walked from the top of Lewis to the tip of Barra in my midtwenties, the flow country of North Uist, dominated by the peak of Eaval has stayed with me. I have longed to come back and explore that bewildering maze of lochs, sea and land.

In 1997, I made the sea/sky chamber work Hut of the Shadows (Both nam Faileas) at Sponish, Lochmaddy, which in a strange way hinted at that relationship between land (islands) and water.”

The Land and Water project began in September 2009 when Drury and Andy Mackinnon (Taigh Chearsabhagh’s curator and filmmaker) made a two day trans-Uist journey by canadian canoe across the island, from the south-west coast to Lochmaddy on the north-east coast. With the wind behind them and a sail rigged when circumstance allowed, they threaded their way through the maze of lochs and waterways, portaging across the moorland in between.

The result of this very physical experience is this extensive show which includes the installation of a suspended woven canoe, made from heather, willow and salmon skins, which acts as a kind of open vessel for ideas, sensations and the material landscape. This is an inhabited and named landscape going back to the Neolithic and as such language and naming embeds it within the culture. Two of the works on the wall, therefore use digital technology to recreate an image of the landscape as a lacework of words in Gaelic, Norse and English, which name all the lochs, islands and hills seen from Eaval.

Other works look at the macrocosm using satellite imagery and maps, and at the microcosm using the gene sequence of a micro-organism which lives off methane in the peat bogs and which plays its part in stabilizing these greenhouse gasses. This work and the Three Views of Eaval are made with the pigment of the land itself; peat.

The final work Breath/Anail (in studio 1), a video loop of a breaking wave originally intended to be powered by a rowing machine, takes us back to the primal experience of this exposed island – to wind, breath and spirit, but also warns of climate change, rising sea levels and increasing storm and flood dangers.