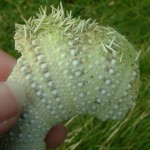 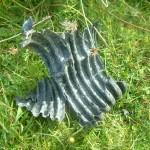 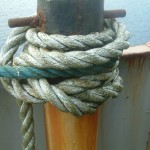 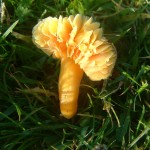 We set off from Lochmaddy, with packed lunches, cameras, video cameras, sketch books, and water-proof rainwear, just in case we would need it. As we passed the first smaller islands, we noticed that there is a cross shape on the top of one of them. The view of the sea and the land looks so different when you are on a small boat, and the voices of the other passengers along with the sounds of the engine and the sea mingled to become quite soothing, though, when we were on the islands themselves, the silence was awe inspiring. I hadn’t realised how difficult it could be to clamber on and off of the various stopping places, until I was stuck, dangling from the boat, when my feet slid on the slippery rocks. Someone (thankfully nameless) lifted my legs so that I could slither, like a seal onto the boat to safety.

We stopped on Hermetrey, which used to have a herring fishing industry on it. I found a very organic looking rusted piece of metal and rope left over from those days. Many manmade articles had been washed up on this island, and had become part of the landscape. Plastic boxes, bottles, ropes, among the remains left by nature: Shells, feathers, wool, and faeces. I found that many mushrooms and other fungi thrived among them, including a very rare bright yellow mushroom, with frills. On one of the islands, I discovered evidence of otters, including a hole where they live, which I put my camera inside to film the remains they had left, mostly crabs shells. I then made my way to the sea and waited untill I had seen one eating some fish.

The clean fresh air resulted in many lichens gaining a foothold on all available surfaces, some of which had grown long and hairy, like a beard.

I am interested in the way nature has taken back the land again, and have been investigating lichens:

Lichens  provide a home to insects and nesting material for birds. Some lichens smell like fish while others are used to help make perfume. The characteristic orange of Harris Tweed was traditionally produced by a dye extracted from rock dwelling lichens.

pollution in the air effects our health:

I was interested too in the stolt fish farms bulk feeding station, which was like a manmade island. We went on to it and climbed up and into the living quarters. The metal had become rusted, the windows broken, there where huge blue pipes everywhere. Yet it had that same calmness and tranquility about it as the uninhabited islands we had visited.