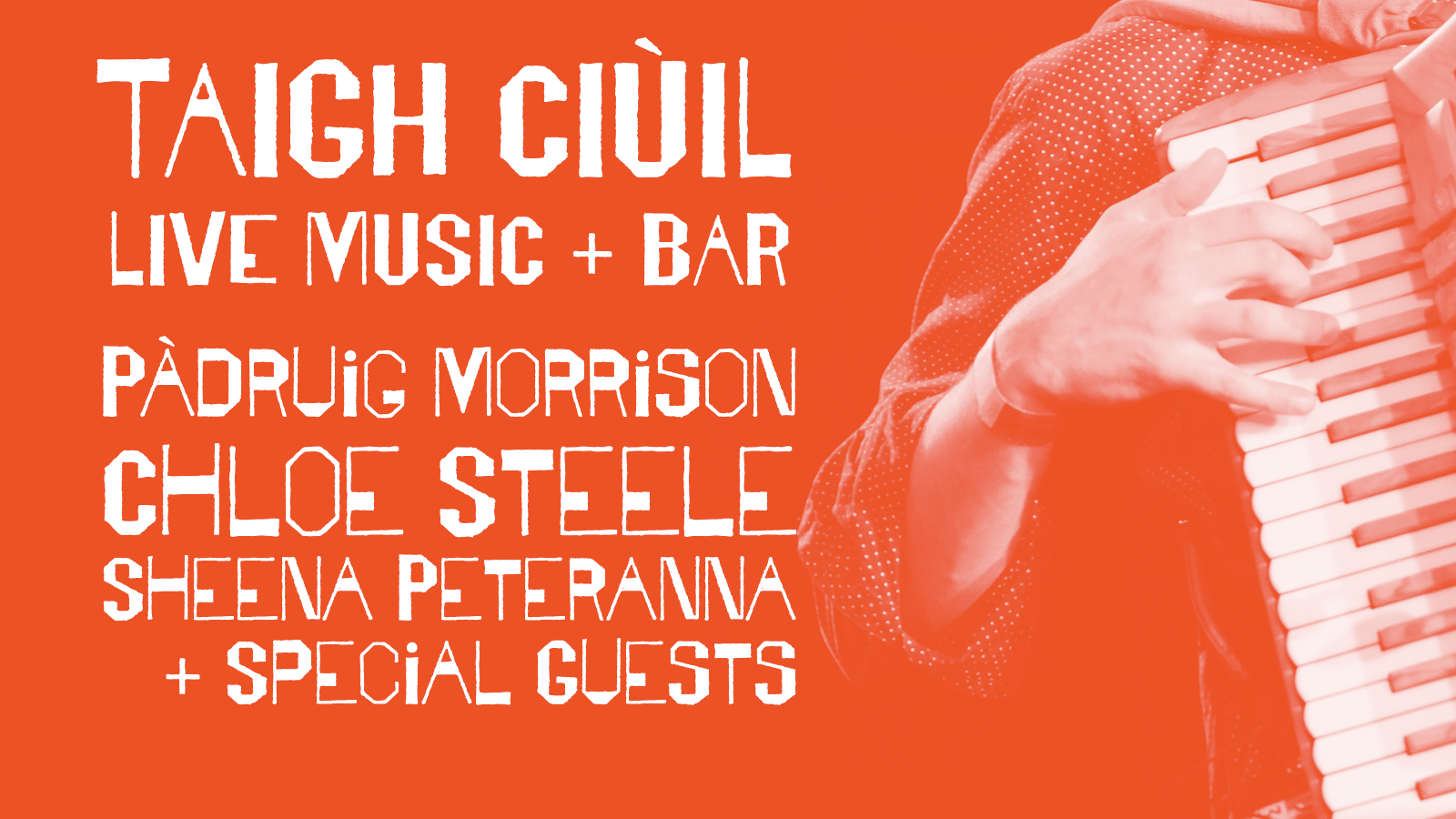 Taigh Ciùil is a series of live music nights hosted by Taigh Chearsabhagh, with the best traditional musicians and a licensed bar. Taigh Chearsabhagh is delighted to announce that we have locally grown Uist talent on the stage for the 10th of June with Pàdruig Morrison, Chloe Steele, Sheena Peteranna as well as some special guests to be announced on the night. We hope you can come along for what promises to be a brilliant night of music with these talented musicians.

Booking your ticket ahead is recommended, which you can purchase below. A small number of tickets will be available on the door, but with strict capacity limits, we cannot guarantee availability. We’ll gather this time at the spacious Lochmaddy Community Hall, for 7.30pm with an interval half way through the evening.

Pàdruig Morrison is a musician and composer from Grimsay in Uist. His work has involved writing for screen and classical ensembles, as well as performing with several traditional groups at many of Scotland’s festivals. He performs regularly with Uist band Beinn Lee, but also performs as a soloist and was a finalist in the 2020 BBC Radio Scotland Young Musician of the Year. Pàdruig is now back full-time in Uist, and is carrying out a PhD in Composition.

Pàdruig will perform a mix of new compositions as well as a number of older tunes from the Uist tradition.

Chloe Steele is a Gaelic Singer and Piper born and bred on the Isle of South Uist. The culture and traditions of Chloe’s Island home is the main focus of her music. Chloe’s music has provided her with many opportunities to perform locally, nationally and internationally. Chloe will be performing a selection of her own compositions and local Uist material.

From South Uist, Sheena is in her final year of the BA Applied Music degree at UHI, with a concentration on performance, and has been taught by Iain MacDonald and James Duncan MacKenzie. She is touring the Highlands with Fèis Rois this Summer 2022 and is embarking on a month-long tour around Germany in June. Sheena has performed with the Far Flung Collective and Argyll Ceilidh Trail and has notable performances at Celtic Connections and Celtic Colors.

Sheena Peteranna showcases simple and beautiful Scottish traditional melodies on the bagpipes, whistles, and flutes, accompanied by the drones of nature from around her home of South Uist. This immersive performance will engage listeners visually and audibly alongside a live film screening, shot in locations around South Uist close to Peteranna’s heart.